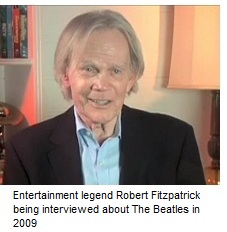 Entertainment giant, Robert Fitzpatrick has died following a long illness.  Fitzpatrick’s stellar career included being a lawyer for The Beatles, The Who, and The Rolling Stones, co-managing iconic bands, such as The Bee Gee’s and Cream, as well as helming Allied Artists for the past ten years.

Glendale, CA – Robert Fitzpatrick, a legend within the film, stage, music and television communities for more than five decades, died in a Los Angeles area hospital Saturday morning, following a long battle with lung disease.  Fitzpatrick joined Allied Artists shortly after a 1999 lung transplant, initially heading the company’s music group, but soon became president of its corporate parent, Allied Artists International.  Recently, Fitzpatrick found himself producing motion pictures, overseeing music soundtracks and even making a cameo appearance in 2007’s celluloid offering Sinners.  Right up to the time of his death and despite the severity of his illness, Fitzpatrick was actively functioning as executive producer and music supervisor on the upcoming Allied Artists feature “A Magical Mystery Tour,” a screenplay inspired by his former client ― The Beatles.

Fitzpatrick was born in San Antonio, Texas but grew up in New Jersey.  The future impresario ran away from home at the age of fifteen, gravitating towards The Big Apple, where he soon became a model and off-Broadway actor.  Fitzpatrick put himself through Princeton University before enlisting in the United States Marine Corps, where he held the rank of Captain during the Vietnam War ― receiving multiple decorations for combat heroism.  After being discharged, the real life war hero headed west to Hollywood, where he resumed his acting and modeling career, landing roles in several 20th Century Fox films, including Dear Brigitte with Jimmy Stewart and Goodbye Charlie with Tony Curtis and Debbie Reynolds.  Clearly indefatigable, Fitzpatrick simultaneously put himself through UCLA Law School, earning both LLB and JD degrees in 1965.  While practicing law, he represented such superstars as The Beatles, The Who, The Rolling Stones and Peggy Lee.  He later joined Robert Stigwood to become President of Stigwood Fitzpatrick Inc., co-managing such notables as Cream and The Bee Gees during their heyday.  Along with Stigwood, he founded Casserole Music Corporation and served as its CEO and President.  In addition, Fitzpatrick served on the Board of Hair’s Natoma Entertainment Group, and produced the Emmy Award winning Underground with Chuck Collins in Chicago.  During his tenure with Stigwood Fitzpatrick, he also managed Mitch Ryder & The Detroit Wheels, Taj Mahal, The Buckinghams, Shady Lady, Dick Dale & The Del-tones, Dobie Gray and his previous law client Peggy Lee.  On the acting side, Fitzpatrick managed Don Johnson and Jay North (Dennis the Menace).  In late 2000, Fitzpatrick joined Allied Artists as president of its music division, later being named president of Allied Artists International, the parent of Allied Artists Pictures, Allied Artists Music Group and Allied Artists Associated Entertainment Ventures.  Fitzpatrick’s soundtrack contributions include many box office hits, such as Pulp Fiction, Remember the Titans and The 51st State.

Allied Artists International’s longtime CEO & Chairman, Kim Richards, released the following statement: “I’ve known Robert since the late 1970’s when he helped a young television soundtrack engineer earn his first gold record. The engineer was me, and I’ve had the distinct honor and privilege of walking in Robert’s wake ever since.  Regardless of the heights this company reaches in the future, they will never be the same without Robert Fitzpatrick by my side.”