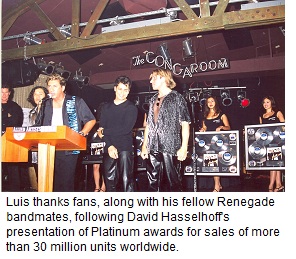 Glendale, CA – Allied Artists Music Group has announced the release of a new music offering from Luis Cardenas, who is best known as the drummer for the Latin rock group, Renegade. As a solo artist, Cardenas previously scored several hits with his Grammy Nominated album “Animal Instinct,” which also earned him New York and Cannes Film Festival awards for the animated music video heralding the album’s first single, “Runaway.” The Del Shannon remake features animated dinosaurs in a junkyard and Donny Osmond, which was followed up by the Cardenas penned “Hungry For Your Love,” spotlighting Phyllis Diller and Cardenas’s own pet tiger, Bundi. Both music videos went the equivalent of “viral” for the times, and continue to play on MTV’s closet classics to this day.

Allied Artists’ CEO & Chairman, Kim Richards, steps out from behind his executive desk long enough to reprise his longtime role as producer for both Renegade and Cardenas. A number of prestigious guest musicians are slated to lend their talents to the effort, along with Cardenas’s own sons, Nick and Zack Cardenas.

Cardenas joined his first “official” band in sixth grade. After a few incarnations, that band evolved and ultimately became Renegade. Initially, the band hit a few bumps in the road, due mostly to their Latin heritage. Finally, Bill Gazzarri of “Gazzarri’s on the Strip” took a chance with the band. Soon after, The Troubadour, The Whiskey and The Starwood all played host to the Renegade wave. Renegade was taking off, and so was Luis’s percussive technique.

The release of Renegade’s debut album “Rock ‘N’ Roll Crazy” took the band to another level, due in part to Luis’s masterful live drum solo on “Let It Out.” Endorsement deals with Ludwig Drums, Paiste Cymbals and Pro-Mark sticks soon followed. As Renegade continued their rise, so did Cardenas’s reputation as an extraordinarily talented drummer.

As record sales and crowds grew with the release of “Renegade II – On the Run,” “Nuns on Wheels” and “Renegade Live,” Cardenas’s drum set followed suit, unexpectedly landing him in the Guinness Book of Records for playing what turned out to be the World’s Largest Drum Set. A solo CD, “Animal Instinct” spawned the hit singles, “Runaway” and “Hungry For Your Love,” the former picking up a Grammy nomination and becoming the most added music video in history. Audiences around the world began recognizing Luis as more than a renowned percussionist, but rather an equally credible songwriter and vocalist. Clearly, success comes in many forms for this well rounded musician. Cardenas and Renegade currently enjoy combined worldwide sales of more than 33 million units.

Allied Artists Music Group began life as the music soundtrack division of Allied Artists Pictures. Throughout the years, Allied Artists has produced not only legendary motion pictures, but truly memorable soundtracks, such as “Cabaret,” by Liza Minnelli and Joel Grey. Today, the company strives to produce, market and distribute quality music across all genres that is both timeless and cutting edge.