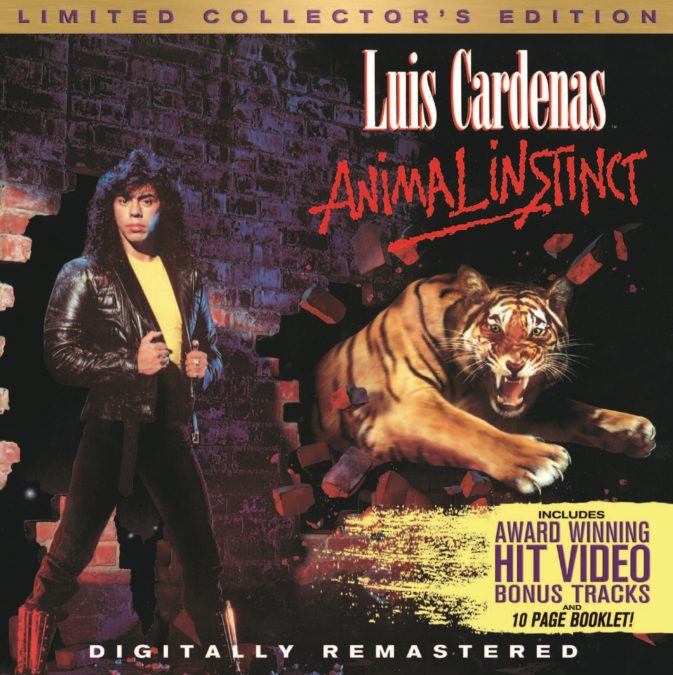 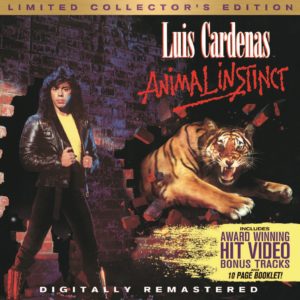 Glendale, CA – Allied Artists Music Group has today announced the reissue of the critically acclaimed Animal Instinct album by Luis Cardenas.  From behind his massive drum set, Cardenas sprang to international attention as the metronome behind Latin rockers Renegade.  A three and a half minute drum solo (ala Ina Gadda Da Vida) on “Let It Out,” from the band’s freshman album, drew raves around the world.  During a hiatus from Renegade, Cardenas began recording his first solo project, which spawned the hits “Runaway,” a remake of the Del Shannon classic, along with his own song, “Hungry For Your Love.”  The music video for Runaway helped define the MTV video era, as lovable animated dinosaurs manhandle instruments and romp in a junkyard with the likes of Cardenas, Donny Osmond and the late Del Shannon himself.  Cardenas’s Renegade band mates even make a cameo appearance at the end.  The Runaway video took top honors at both the Cannes and New York Film Festivals, followed by an equally clever video for Hungry For Your Love, featuring Cardenas, with his pet tiger, Bundi, being heckled by a boisterous and haughty Phyllis Diller.  A world tour and countless television and radio appearances ensued, ultimately garnering Cardenas a Grammy nomination and positioning him as a credible solo artist, on top of his duties as the heartbeat behind Renegade.

At Cardenas’s request, Kim Richards reprised his role as the album’s producer, digitally re-mastering Animal Instinct; this time including both hit videos all within an enhanced CD format (CD Extra).  Cardenas also includes a 12-page booklet filled with lyrics, photos from his personal scrapbook and memories in his own words.  The reissued CD hits stores on March 6, 2012, and will be available through all major retail outlets as well as digital download sites.

Cardenas has teamed up with his two sons, Nick and Zach Cardenas, to write and record a brand new double CD aptly titled “Generations.”  Stephan Bauer, President of Allied Artists Music Group, notes that “we’ve had an onslaught of requests to re-release this product, but wanted to wait for the right moment.  With Luis’s new CD, that introduces his sons hitting stores later this year, it seemed like the perfect time.”  Cardenas proudly explains that he “was in the delivery room” when the new “generations” of Cardenas boys were born, and he “put Pro•mark drumsticks in their hands so they would be the first thing they felt.”  Ever the proud papa, Cardenas boasts “and it worked, just look at them play!”  Growing up the boys enjoyed their father’s guidance, as Cardenas helped them hone their technique and develop their now formidable skills.  Although the Cardenas boys make their professional recording debut alongside their father, they already have an impressive resume having racked up top honors in school talent shows, propelling them to performances on prestigious stages, including the Los Angeles House of Blues and the Honolulu Bowl.  Richards, who is producing the new double CD, along with Cardenas, adds “watching the boys follow in their dad’s footsteps is like déjà vu all over again – they’re truly chips off the old block.”  Richards goes on to say “Audiences will be stunned at their talent.  I don’t know if it’s genetics or osmosis, but you’ll be hearing from these brothers for decades to come!”