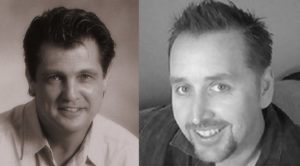 Peter Liapis began his career onscreen, starring in 1978’s Sextette, alongside Tony Curtis, Ringo Starr, George Hamilton, Alice Cooper and Mae West (in what turned out to be her last movie).  Following dozens of roles, including playing Jonathan Graves in the Ghoulies franchise, Peter moved behind the camera, writing and directing for Cinetel Films, The Image Organization and WIN International Pictures.  By the turn of the millennium, Peter was a driving force behind Gotham Metro Studios, where he further honed his writing and story development skills.  In 2004, Peter was named Senior Vice President of Global Universal Film Group, moving to the presidency in 2008.

William Summers is a 25 year veteran of the entertainment industry.  His wide range of experience covers every aspect of entertainment, including a unique and innovative approach to film making.  Summers’ Film finance and production expertise has enabled him to work on many film, television and music projects over the years.  William first began his career in film and television, but soon gravitated toward the music business, becoming an executive with Intersound and later Warner / Electra / Atlantic (WEA) and Reprise.  In 1999 Summers was named Vice President of A&R for Avalon Records in Nashville.  In the Spring of 2003 Summers resumed his career in television and film, producing such television shows as Vessel Fitness, Vegas Pawn and working on films with Matthew McConnaughey, Illeana Douglas and Clarence Williams III.

Liapis and Summers joined forces in the beginning of 2010, founding Summer Stone Entertainment, where they developed a slate of film and documentary projects that will now fall under the Allied Artists Pictures banner.

“We searched for a combination of relative youth and experience,” said Allied Artists International’s CEO & Chairman, Kim Richards, adding that “Peter and William are fresh blood, with innovative plans and the energy necessary to propel Allied Artists Pictures into the forefront of this industry.  They’ve already hit the ground running, and I support them fully!”  Commenting on his new role, Liapis states “I’ve been a huge fan and admirer of Allied Artists for a number of years and am tremendously excited to be joining the Allied Artists team.  We’re quite proud of the current slate of high quality projects underway and anxiously look forward to releasing them in 2011.”  Summers adds, “I’m extremely excited to be working with Allied Artists and Kim Richards.  Both have been icons in the entertainment industry for many years and I look to further build on the legacy.”